The End of Half Days for Huron Valley Schools 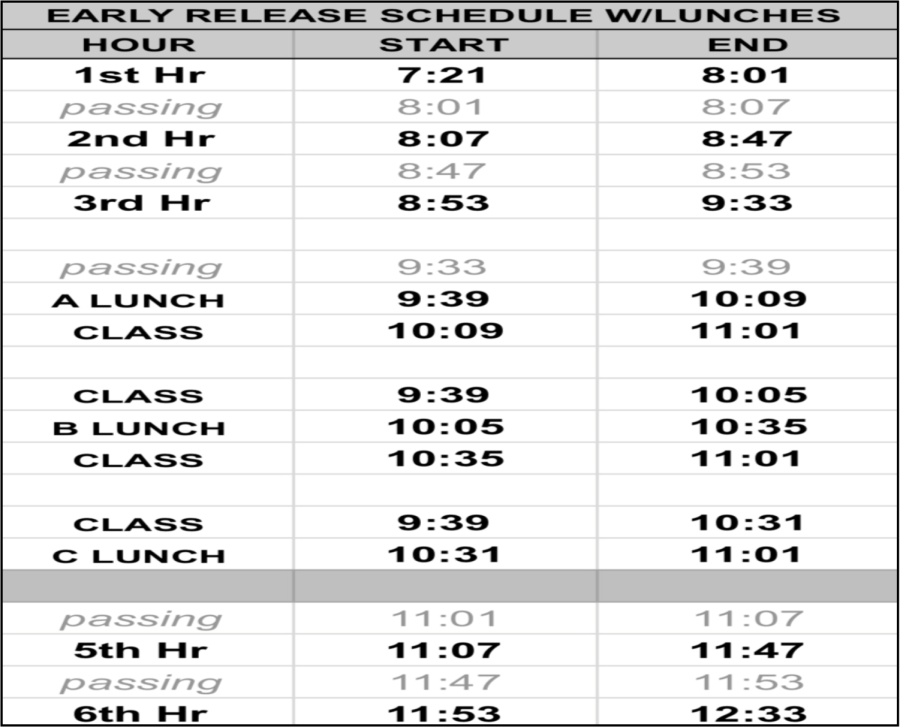 The addition of early-release days this school year has left many students and staff members unhappy about the change to schedule. . Milford, as well as all other Huron Valley Schools, have switched over to “early-release days” in replacement of what used to be normal half days. These early-release days end at 12:33 p.m. instead of 10:49 a.m. MThis s change has become a controversial topic, causing many mixed opinions. While this change may have been set in place to improve efficiency, the opinions of many people affected by this change say otherwise.

The issue is that students feel that the 40-minute periods  don’t provide enough time to have a full lesson for the day, inconveniencing everyone. “It’s a little frustrating because we get out like an hour and a half early, yet it’s not like a half day where you can be productive in another way after school with homework,” senior Ella Warzecha said.  “But it’s not like a full day of school where you could be productive in school, so it’s kind of a waste.” Some may argue that students prefer half days because it means less work and less time at school overall; however, others have stated that even holding a full day of school would make more sense to an early release day. “I honestly would rather just stay the full day at this point,” MHS junior Bella Wertz shared, “It’s such an awkward amount of time throughout each class and teachers are always cut short on their lessons. I think a half day would be nicer overall, but if we can’t do that then I would just rather have full days.”

Administration may believe that adding more time to the school day isbeneficial overall, but students andare still frustrated. Half-days have been in place for what seems like forever, so why is it that changes have been made to change something so consistent? Milford High School Principal Kevin Mckenna provided the district’s reasoning, noting that the time after students dismissed is used for staff professional development.  “It’s easy to have half days at the high school level because kids can find a way home most of the time, but the middle and elementary school’s parents discourage it big time because they have to think how to get their little ones home, especially for those that are working,” he said. Parents of younger students, or those who do not drive, are constantly finding themselves in tough situations when planning out rides home at such an awkward and busy time during the day, so it would be much more convenient to push the day back to a later time, so staff can still complete training, and parents have more time in the day to adjust their schedules and find rides for their kids. However,for a higher age group, such as high schoolers, early-release days are much more efficient, as they have more access to transportation. On a high school students’ behalf, the early-release days leaves students and staff in an impractical and time-restricting environment to learn in.

When asked if half days should make a comeback, most were all for it.,“I want the half days to be back,” Milford freshman Evia Marszalek said It makes the most sense for me and most other high students. I have a ride every single day and I’m pretty sure most people do too.” Bringing back half days would solve a lot of issues many have brought up, such as having shorter  lessons while staying on track of time, and having a more laidback and easy day for students. A compromising option for this debate could be to hold half-days for high school students, and early-release days for middle and elementary students . This could resolve the awkward lesson planning for high school teachers, as well as being more helpful to high school students, while still resolving transportation issues for the parents of younger students.