The Milford Messenger • May 3, 2022 • https://www.themilfordmessenger.com/sports/2022/05/03/the-girls-lacrosse-team-dominates-the-season/ 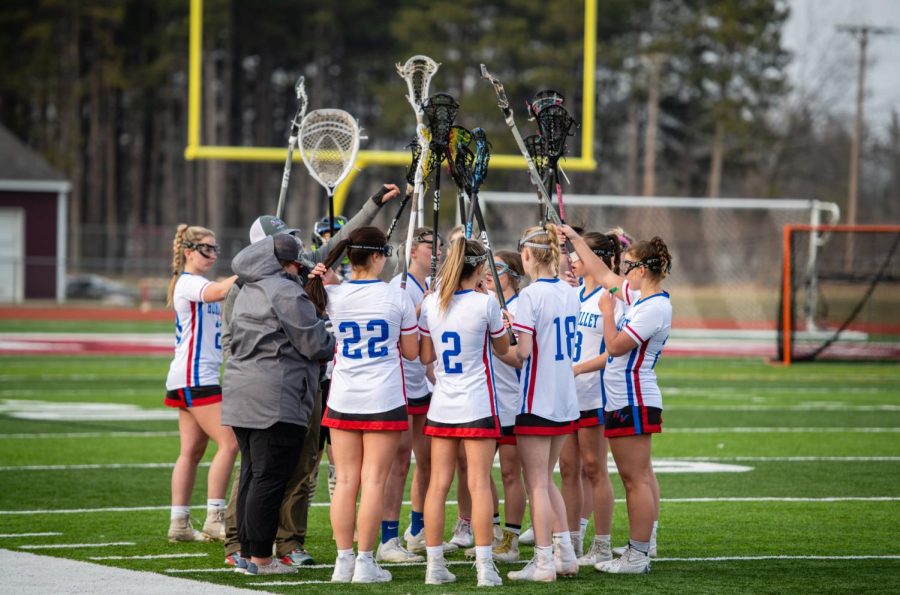 Girls Varsity gathers to do a chant before taking their positions.

Contrary to recent Michigan weather patterns, spring has begun, and high school athletes are in the midst of spring sports – one of them being girls lacrosse. Students from Milford and Lakeland have joined together to form the Huron Valley United Lacrosse Team, most commonly referred to as the Titans. The girls lacrosse program continues to grow through the hard work and dedication of the JV and Varsity team members and the combined efforts of head coach Larry Mason, assistant coach Sarah Sheehan, and JV coach Brandon Leslie.

As the Titans dominate teams from not only the Lakes Valley Conference, but all over Michigan, preparing for Regionals takes top priority. After winning the LVC championships during their 2020-21 season, the Varsity team went on to compete in regionals. However, during a challenging game against Midland, the Titans came short of bringing home the title. “I’m looking forward to us making regional finals and to win…where we left off last year,” said Mason, who has been coaching for six years.

The players are just as hopeful the team can extend its playoff run. When asked about what her goal is for the Varsity team this season, a junior at International Academy West and three-year varsity player Emily Prell said that she aspires for her and her teammates  “to make it as far as we can in the regional tournament.”

The season is far from over, but the competition is tough. However, the varsity team is 5-2 to start the year. With help from their coaches, both teams are preparing to face off against Brighton High School on May 12. Ashley Spangler, a junior at Milford and two-year varsity player, agreed with multiple of her teammates that Brighton is going to be the Titans’ toughest competitor this season. “They are a very aggressive team, and with our hard work we have a chance at winning,” she said

However, no matter the outcome of the season, the coaches all share a common goal for their athletes. In a statement about the development of the Varsity team, Mason said, “I’m really looking for us to develop…that strength within so that we know how to finish a game, compete, and win.” As for the JV team, which started 2-1, Sheehan welcomed new and returning players and is helping them develop into strong individuals. She said that she aims to support her players by “forming the females of today into women…and helping them with their lacrosse career.”

A freshman at Milford and a new member of the JV and Varsity teams, Piper Girardi described her love for lacrosse. While expressing gratitude for her new teammates, she also praised the coaches’ friendly attitudes and efficient communication. In a statement about the key qualities needed in order to have a strong team, Leslie stated that “being a good communicator” and “strong communication is key to being successful in this world.”

The Titans are expected to compete in 2 to 3 games per week, some of them being at Lakeland and the remainder being at the school of the opposing team. Family, friends, and community members are welcomed and encouraged to come and support the JV and Varsity teams at their upcoming games: May 6 against Northville (at Milford), May 9 against Walled Lake Northern (at Milford), and May 11 against Saline (at Milford).

Please note these dates are prone to change. Additional information about game dates and times can be found at lakelandeagles.org under the spring sports section.