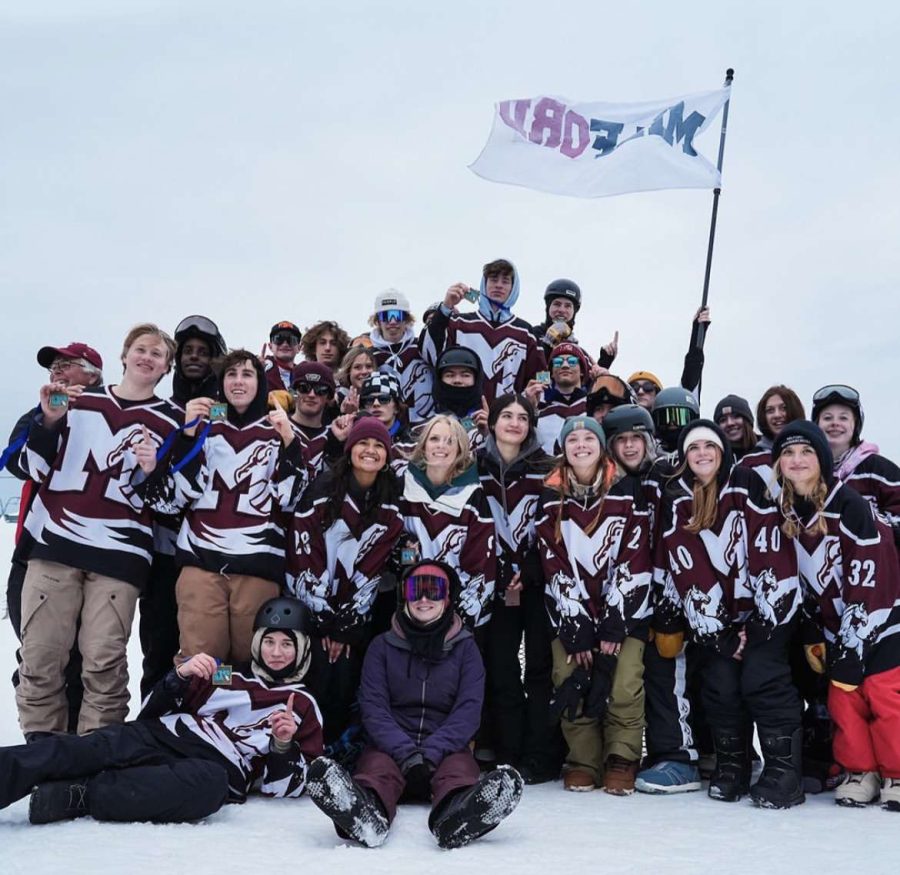 The Milford Boys Boardercross team has accomplished what every team in the state desires – they are the undefeated state champions after winning the State competition on Feb. 16, 2022.

From the start to end of the regular racing season at Alpine Valley Michigan, the Milford Boys Boardercross Team finished first in all of their five races against six teams. Throughout the season, the team’s biggest competitor Lakeland, was scoring close behind Milford almost every race, but Lakeland, nor any other team could catch the Mavericks.

To qualify for states, teams must place either first or second out of six in the qualifying races either at Alpine Valley or Mt. Brighton, as well as one additional team from a wildcard race. The state qualifiers ended up being Milford, Lakeland, Catholic Central, Pinckney, and West Bloomfield.

Milford knew beforehand that they could beat Lakeland as they had previously defeated them, but CC, Pinckney, and West Bloomfield were a mystery and could be a challenge for the team races. “Lakeland was never a challenge to us, but Mt. Brighton teams could be a threat,” said Senior Carter Ryska. “Catholic Central is likely our biggest competitor, as their school supplied them with over $10,000  worth of top-of-the-line race boards, and Pinckney, whose school SBX program produced an olympian racer, Jake Vedder.”

On Wednesday, Feb. 16, the teams arrived at Mt. Brighton. Every race beforehand was a cold, icy race with corners like ice rinks and jumps as hard as concrete. At 9 a.m., the temperatures already reached 45 degrees, with forecasted temps as high as 53 degrees during team races. Wind speeds of 21 mph and gusts up to 35 mph were also predicted. This had the possibility of being a big problem for Milford. These conditions were rarely practiced in, as warmer temperatures meant softer, slower, and stickier snow. On top of that, Mt. Brighton has a completely different course setup than Alpine Valley. Either way, Milford knew they could push through.

In the Boardercross State Races, each team selected 10 varsity riders and were named V1 to V10 according to skill level, lower numbers being the most skilled. V1 riders from each team race together in a single race, then V2 riders race, and so on until V10 riders race, and then the cycle repeats. Once every rider completes three races, points are added up and the winning team is announced.

Sophomore Landon Matt lined up for the gate in V1 position. Wind gusts 230 ft above ground level at the top of the hill make it almost impossible to hear and stay stable as riders are practically kites. “Riders ready… Attention… Go!” Says the gate operator, and races are off. After the first races for the varsity riders, Milford was in first place, with CC not too far behind. The fight for first place continued for the second set of races, and although Milford was in the lead, a few mistakes could sweep them into second. Luckily with consistency throughout the races, and racers Jagger Edson, Jett Edson, and Cody Delise placing first in all three of their races, Milford came out on top with a substantial lead, having CC and Pinckney placing second and third.

Coming into the race, Milford was already confident. “We knew we could win the team race as long as we raced like we knew we could, so really it came down to finishing off the season beating Lakeland,” said V2 racer Jack Stander. “Winning States would be a huge win, but on the line we just want to beat those Eagles.” Their confidence in this case worked in their favor, bringing Milford home the state championship.

Though it seemed like a perfect season for Milford, it came with its challenges. Most of the team consisted of young riders, compared to the senior-packed competitor schools. Especially for Sophomore V1 rider, Landen Matt. “Start of the season, I tore my labrum in an SBX race thinking I would be out for the season. After the doc told me I could race again with one arm gate pulls, I pulled through and raced V1 at States against seniors who weighed twice as much as me. With reconstructive shoulder surgery the next morning, being a major part in a State Championship rewarded all the hardships I had to go through.”

So what’s to come through for next year? Well first off, Milford will only lose three Seniors, that being V4, V5, and V10. The top three competitors  will still remain, and they have plenty of fast and competitive junior varsity riders to fill in those missing spots. If everything goes as planned, Milford will once again be a top competitor for next year’s State Championships.