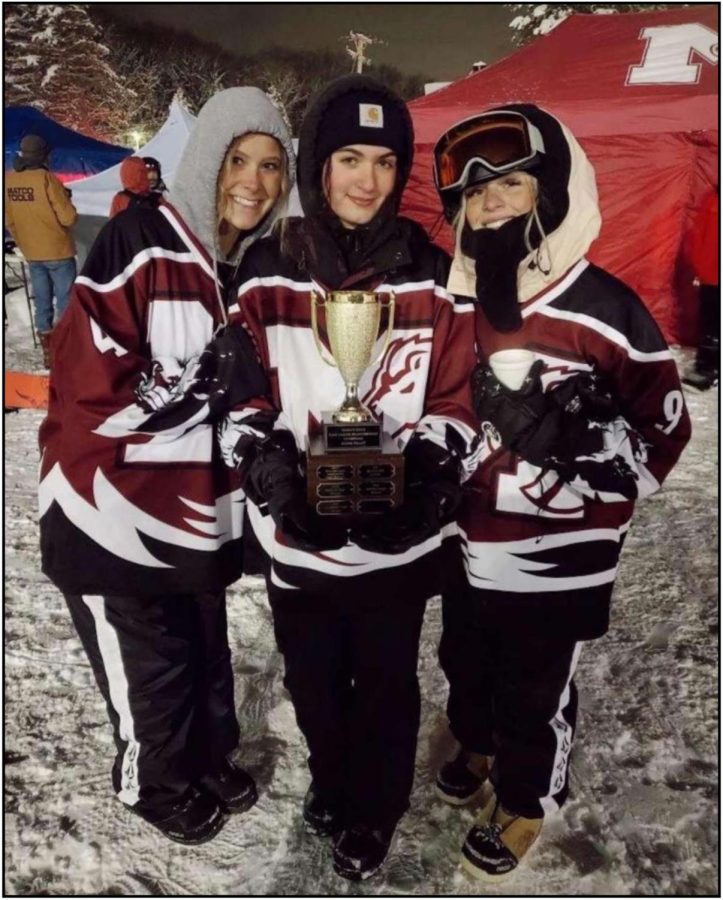 The Girls Varsity Snowboarding team had a successful season, placing third at the state meet at Mt. Brighton Ski Resort. Throughout the season, the team had many victories, including winning “Queen of the Hill” (an event that features all teams whose home course is Alpine), the LVC conference championship, and 1st overall at four of the Regional meets. With all the hard work and obstacles the girls took on, they were proud of their accomplishments.

Boardercross is a very dangerous and exciting sport to watch; it requires athletes with a lot of experience and bravery. These girls train all season to shorten their times, requiring them to practice the course repeatedly.

When the gate drops, athletes have to pull as hard as they can to get a spot in the front, racing 3 other racers. As the girls race down the hill, they attempt to pass each other on the narrow track while staying within the flags. The course includes multiple jumps, rollers, and berms.

Casey Meadows, a junior on the team, has been snowboarding since she was 8 years old. She talks about how her levels of experience have changed over her years. “I had to become more aggressive because that ultimately determines your place and how well you do in the sport, she stated, “You have to be confident in your riding ability and be able to take criticism when you’re doing something wrong.”

Even though the girls are racing down the hill individually, the team aspect is just as important. This team created friendships for many of the girls and they are all so supportive of one another.

“Everyone on the team gets along really well, and all of us worked hard this season and we overcame a lot of obstacles, especially on the girls’ team,” said Meggie Martin, a junior on the team.

Five of the girls qualified individually for the MHSAA EAST Conference for States. Casey Meadows (2nd), Chloe Howard (6th), Alexandra Parris (16th), and Meggie Martin (17th) all placed at the event, with Dani Ryan petitioning in.

The girls team faced a shocking misfortune this season when Chloe Howard, a sophomore on the team, was in a severe snowboard accident at Copper Mountain, Colorado. This was devastating for Chloe and the team considering States was only four days away. To support her, the team made stickers for their boards saying “Ride-on Chloe.” They also wore purple bandanas because it is her favorite color.

With Chloe’s absence, the girl’s lineup had to change, putting more pressure on girls that had to move up to fill her spot. Chloe is now out of the hospital and back to school, taking a couple classes. Her mother states in a recent post on Facebook that “She works really hard during her sessions and continues to make progress everyday.”

With all this said, the Girls Snowboarding team is proud to take home third at States. They are happy to end this season with a comeback and are looking forward to next season already.