Swim and Dive has a meet for the record books! 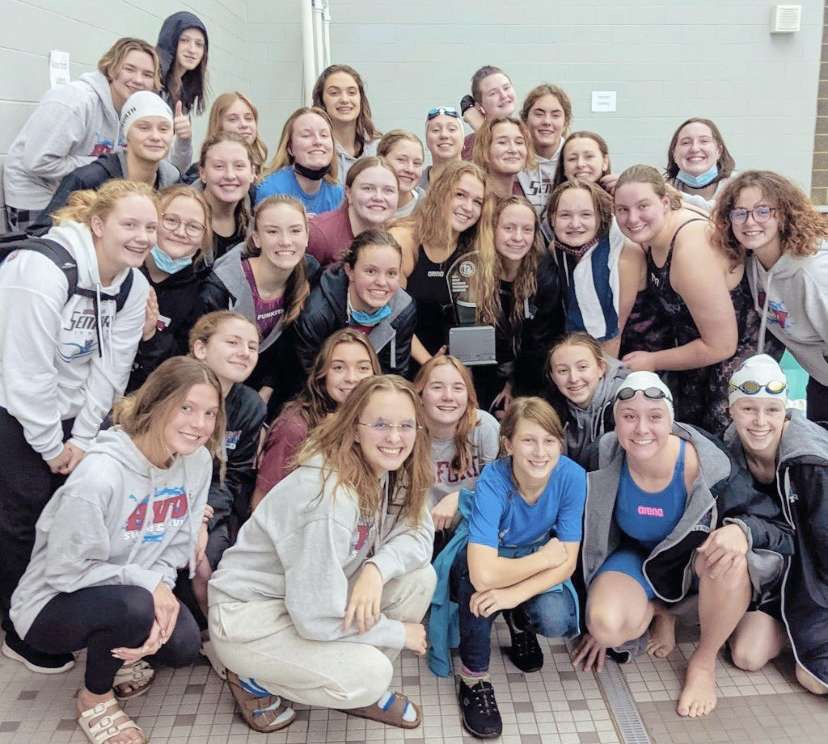 HVU Swim & Dive with the Championship trophy after winning the meet by 58 points and becoming Co-Champs with Walled Lake United.

Huron Valley United (HVU) Girls Swim and Dive had a meet for the history books. For the first time in Lakes Valley Conference history, the Regular Season Champion trophy and Tournament trophy didn’t end up in the hands of South Lyon.

South Lyon has dominated the conference since it was established, but this year it was different. HVU Girls Swim and Dive captured the Tournament Champions trophy and shared the Regular Season Champion trophy with Walled Lake United (WLU) and became co-champions with them.

“It is what we had worked for—from the very beginning, all the way to the end. So being able to see the pride on all of my teammates’ faces was quite moving,” shared International Academy Sophomore Karolina Spiewak. Lakeland Senior Captain Emily Dexter agreed, “ It was such an indescribable feeling of pride and accomplishment.”

HVU did not just narrowly edge out their opponents; they  ended up winning the conference meet by 58 points! After an already impressive season including making history by beating South Lyon for the first time, HVU wanted to continue their record-breaking success by becoming the first team in Milford and Lakeland Swim and Dive history to win the conference meet, and that they did!

“I was so proud to see how both the Lakeland and Milford girls had worked hard and come together as one to achieve something no other swim team in our district has ever done before,” Assistant Coach Sam Snyder shared. The team knew coming into the meet that they had the unique opportunity to become conference meet champions, but that title didn’t come without months of hard work in and out of the pool. 2 hours and 15 minutes of daily intense training helped lead the team to their end of season victory.

On Friday, the preliminary session of the meet occurred where all swimmers in the LVC had the opportunity to advance to Saturday’s competition by placing in the top 16. HVU set themselves up for success on Friday, and all they had to do on Saturday was race. Knowing how high the stakes were for this meet, nerves also ran high. “The first few swims of Friday’s prelim session were a little tight,” said Head Coach James Schuler. “While we swam fast, there were one or two that weren’t exactly what we wanted them to be, but as the meet moved along, the team definitely relaxed and approached the meet more like our past competitions and let their racing do the talking.”

One of the biggest aspects of a meet is the start and we had a very strong start. The 200 Medley Relay consisting of Senior Anna Malik, Senior Gracie Smetana, Sophomore Karolina Spiewak, and Sophomore Riley Morgan clinched fourth, becoming All-Conference and beating WLU by one second. Shortly after,  Lakeland Freshman Lauren McCaul won the 200 Individual Medley, creating a strong lead heading into diving. HVU then went 3rd-6th in the 100 freestyle bringing in more points! More notable swims were the 200 Freestyle Relay placing 2nd with a team consisting of Freshman Elle Dameworth, Armstrong, Freshmen Coral Hebert, and McCaul. “Once the 100 Breaststroke finished, and we had officially clinched the meet, regardless of the outcome of the final relay, that was a really special moment on the pool deck,” shared Schuler. To conclude the meet, the 400 Freestyle Relay won by about 5.5 seconds achieving their state time! The team consisted of Senior Paxton Moore, Dameworth, Spiewak, and McCaul.

After the meet concluded, the team huddled together awaiting the announcement of the final scores.

For Seniors, it was a very special moment to see their high school swim careers end this way. The girls all anxiously awaited the scores and when the announcer finally named HVU as Conference Meet champions and Regular season Co-Champs, there was jubilation.

“The whole team was jumping around, screaming, and cheering,” said Armstrong. “It was just amazing because we’d had this goal and nobody had ever accomplished it before, and we worked harder all season than any other swim team, and now we got to see all our hard work amount to our win.” The coaches agreed. “ It was just absolute magic for me to watch,” shared Snyder. After months of hard work and dedication it was amazing to finally accomplish the one thing that the entire team had craved for so long.  “I could not have been more happy for the athletes and especially the Juniors and Seniors that had not gotten to experience a ton of winning moments to that point in their high school careers to be able to have a big one to end the season, I could not have asked this team for anything else,” said Schuler.

Overall, the HVU team had a finishing record of 4-1 in conference and 6-1 overall. Neither Milford nor Lakeland swim and dive programs have had a more successful season than they had this year together. Although the HVS rivalry is gone, beating the rival school never felt as good was winning the Lakes Valley Conference title. Lastly, Schuler added