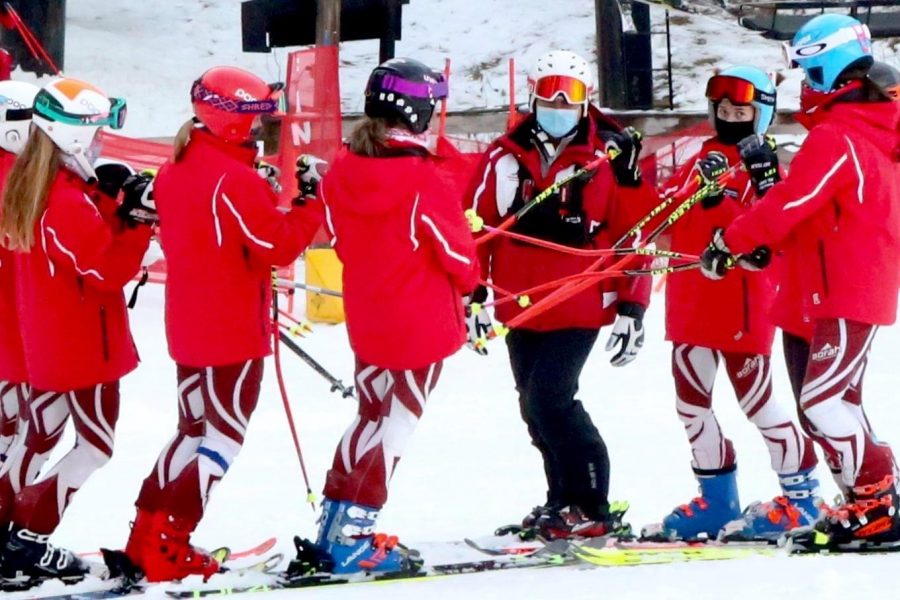 The Mavs go over inspection plans at the bottom of the hill (Photo courtesy of Resa Abbey).

The Milford girls skiers rounded out their regular season, 9-0, and are heading into the championship season with high hopes. Throughout the four week long season, the Lady Mavs competed in three dual meets and one tri meet.

Throughout the season, Coach Marty Neighbors has led the team for his 34th season with Milford. When asked to describe the girls in one word, his response was “tenacious.” The team has definitely been persistent and consistent throughout this particular season. “My favorite race is the one to come,” Neighbors said.

Starting off strong against Novi and Marian, the girls flew by the teams; MHS’ team was led by Junior Maddie Melody and Senior Riley Watts, who stacked up in 1st and 2nd overall in the giant slalom. The Mavericks were supported by Freshman Ellie DeYoung, who took 8th in the slalom overall and Junior Makayla Woolhiser, who took 11th. “My goals for this season were trying to stay forward and aggressive on the course,” said DeYoung. “I love being on the hill with everyone cheering and being very supportive.” DeYoung was not only able to meet her goal, but finished in the top 10 for her first high school race.

Milford was able to carry its momentum into the tri meet the next week, taking Hartland, West Bloomfield and Walled Lake Western all by at least 24 points each. The team saw a stand-out performance from Freshman Bella Woolhiser, landing herself a scoring position in 15th place in the giant slalom: “I was very excited to be contributing to the team,” Woolhiser explained. “ I feel like I really improved from where I started at the beginning of the season.” The Mavericks finished off the week with a clean sweep.

Moving forward, the Mavericks raced against rival school Lakeland. It was a close race for the ladies, sliding by with only a nine point lead. It was a great slalom race for Makayla Woolhiser, who finished 9th overall. “It felt like a huge accomplishment and proved to myself that nothing can get in your way if you’re determined,” she shared. This was Woolhiser’s first top 10 finish since bouncing back from a season-ending injury.

On Week Three, the girls also competed against Sacred Heart, taking a 14 point lead with help from Seniors  Kiersten Tokarczyk and Emma Sayles scored for the Lady Mavs in GS.

Finally, reaching Week Four with a record of 7-0, the Milford Mavericks were to take on Walled Lake Northern and Walled Lake Central. With determination to finish out the regular season undefeated, the girls were skiing in top notch form. The scoring team in the slalom included: Melody (2nd), Watts (5th), DeYoung (8th), and Bella Woolhiser, making her way to the top with a 14th place finish. In the GS, things played out similarly; the results were as follows: Melody (2nd), Watts (5th), DeYoung (9th), and taking the 4th scoring spot was Makayla Woolhiser in 12th overall. Not too far behind Woolhiser was Sophomore Rylee Lynch in 13th.The ladies stacked up nicely for an undefeated regular season. “Our latest race against Central and Northern was most rewarding,” Watts said. “It was a nice way to round out the season.”

Ready to kick off the team’s championship season, Milford took divisionals head on. With limited miscues on the ladies’ side, the win was in their favor. To kick it off,  Melody took a 1st and a 2nd place finish. Watts took 6th and 5th. Makayla Woolhiser finished with 9th and 16th. DeYoung took 10th and 11th. Rylee Lynch finished 13th. Keeping it consistent, Bella Woolhiser took 12th and 15th. Tokarczyk held a 28th and 34th, and Sayles took 34th.

The Mavericks most recently competed at Regionals where they brought home the first place trophy. Stand out performances came from Melody, who took first in both disciplines, and  Watts, who tied with Melody for 1st in GS and took 4th in slalom.

Next, the girls are looking to race at the State Championships at Nubs Nob on February 22nd.