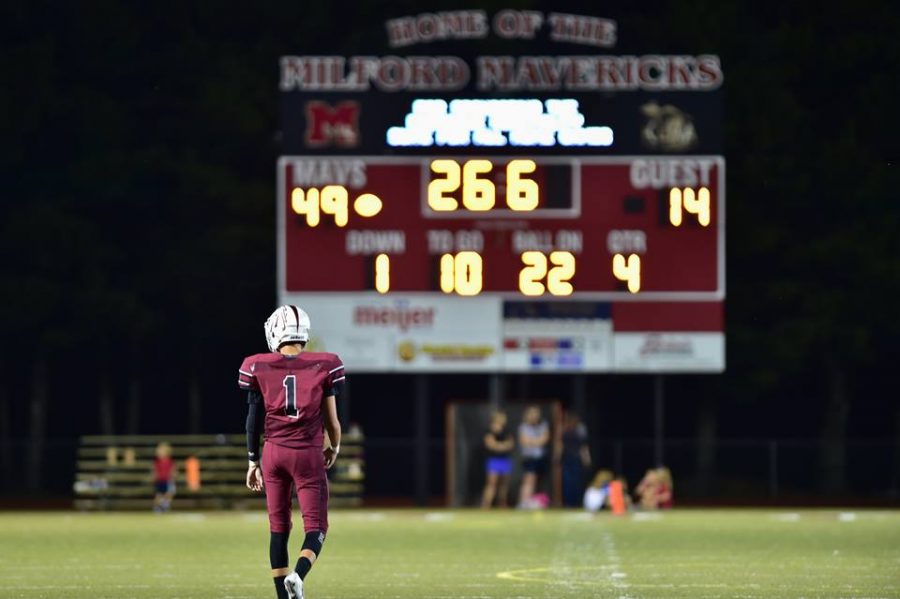 Aiden Warzecha, a 6-foot 3 junior, was thrown in on offense for a play against Lakeland until the trainers could figure out the severity of senior starting quarterback Zack Jones’ injury. Once the team realized that Jones was out for the game, players had to dig deep and rally around Warzecha at quarterback.

“I just wanted to go out there and have fun,” said Warzecha, who has assumed the role of starting quarterback after Jones went down with a season-ending injury. Several different players, including Jones, have had their seasons ended early on, a very unfortunate and unlikely situation, and the team has posted a record of 2-3.

“This isn’t the way I wanted to play quarterback,” said Warzecha. “But my teammates have given me lots of positive feedback.” The junior stepped up and kept Milford in the game until the very end when he threw a touchdown to Evan Johnson in the last minute against Lakeland. Although Milford ended up losing, it was still a step in the right direction for the Mavs.

“That was a tough, tough loss,” said Warzecha, whose late touchdown was named the Star Lincoln Play of the Week on the State Champs Sports Network. Not only have his teammates witnessed his growing leadership, but his coaches have seen the growth as well.

What’s lost in Warzecha’s success is the loss of Jones, a pure athlete for Milford, who also plays varsity basketball and track.

“We all feel sad for Zack,” said senior wide receiver Evan Johnson, who has also gone down with a season ending injury. “But I know Aiden will get the job done. We have lots of room to improve, but we’re confident.” Johnson was likely the favorite target of Warzecha before breaking his leg in the Hartland game, another huge loss to the Mavs’ receiving core, along with senior wide receiver Billy Cawthorne.

Senior running back Conner Jensen is another teammate who has high praise for Warzecha, attributing his leadership skills, his confidence, and his ability to make the team better to Aiden’s success. And with him at the helm of the offense, players and coaches are predicting to finish with a winning record, even after the onslaught of injuries.

“We’re going to continue to have passion and drive,” said Adams. “Any time you get talented kids to work hard, you have an okay team.”

“We can make a big move in the KLAA,” said Johnson.

The Mavs look to continue to work hard, stay healthy, and live up to their predictions of a winning season, while dealing with an unfortunate onslaught of injuries. They next play at Brighton (4-1) on Sept. 29.