Sandy Hook should have been a turning point, but it wasn’t 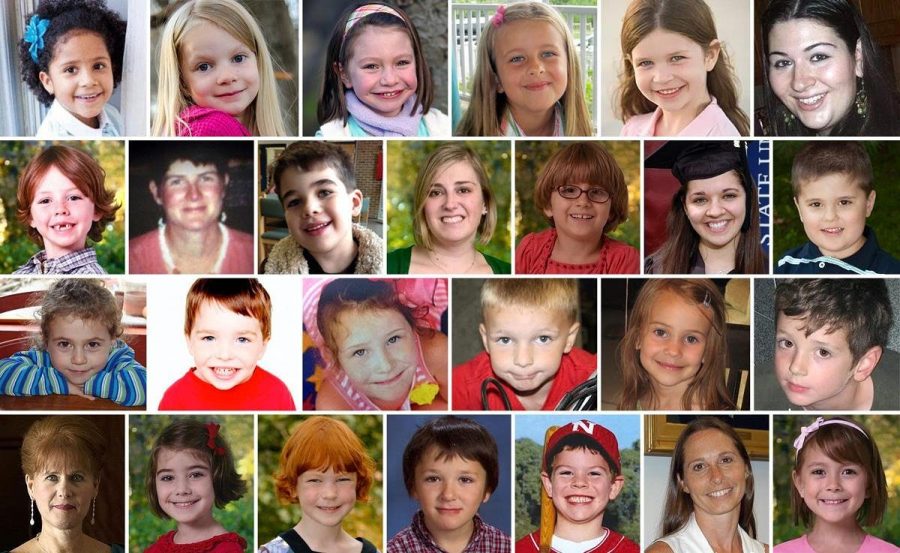 These are the 26 victims of the Sandy Hook shooting. There is not enough room in this caption to fit all of their names.

Before watching Milford High School’s production of “26 Pebbles” on March 19, I was barely familiar with the Sandy Hook Elementary School shooting. It happened when I was in the fourth grade. I vaguely recall the news broadcasts about it, and I remember hearing that young kids were killed, but that’s about the extent of it.

I learned more about the Boston Marathon that year than Sandy Hook, probably because my parents would turn off coverage of it immediately. I don’t think they could bear to listen to the fact that kids the same age as my little sister— kids in an elementary school, hauntingly similar to the one that I was in at the time— had been so brutally murdered. It didn’t matter that it was in Connecticut. It was in America, and that was enough.

The facts are these, though they are incredibly difficult to read, and even more so to actually think about: a 20-year-old with severe mental health issues, a history of preoccupation with violence, and an extensive gun collection forcibly entered Sandy Hook Elementary School around 9:35 a.m. on Dec. 14, 2012. I will not name him— he deserves no recognition for the atrocities he committed. He killed six adults and 20 first-grade children from 9:35 a.m. to 9:40 a.m., after which he ended his own life. Many students survived by hiding sufficiently. One six-year-old girl survived by playing dead. One classroom was spared by a closed door and a black piece of construction paper over the window looking into it, possibly making the shooter think the room was empty. A lot of teachers saved their students’ lives by telling them to hide and be as quiet as they possibly could. 20 six-year-olds and seven-year-olds. Six adults.

The final scene in the show was the one that broke me. I had managed to keep my tears relatively contained up to that point. I’d cried at several points, but had calmed myself enough to prevent a total breakdown. Then the cast began to sing softly to a gently-strummed guitar, lights on the floor, lit paper bags lining the stage, and each cast member began bringing out two white paper-bag lanterns at a time, one in each hand. Each had a victim’s photo on it. Just one photo. They set them down, one by one, and when they were finished, I looked at the faces of every child and educator whose lives were stolen from them on that Dec. 14. The children’s faces shook me the most. They were all smiling, their pictures taken by their parents as they probably did something fun together on some Saturday afternoon. I couldn’t contain myself anymore after that.

Sandy Hook should have been the wake-up call. The perpetrator had a well-known history of severe mental health problems, and should have been taken better care of by our mental health care system. He was diagnosed with Asperger’s and OCD, and was so anxious about going to school that administrators designated him “homebound” (unable to be at school even with extensive support) by the time he had finished 8th grade. His parents brought him to Yale’s Child Study Center, who concluded that he needed a lot of support, therapy, and professional assistance, very little of which he ever actually received. He was put on antidepressant Celexa and stopped using it after three days. Experts agree that though his poor mental health was just one contributing factor in his decision to do what he did, if he had been properly cared for, if he had actually been taken to see professionals and seek help more than just a few times, that factor could have been eliminated. Maybe Sandy Hook would still have happened. Maybe it wouldn’t have. At the very least, though, the chance that he would still make that decision would undoubtedly have decreased.

Sandy Hook should have also been the wake-up call for the lack of gun control in America. If the perpetrator’s access to guns had been more limited, perhaps he would not have done what he did.

Maybe he would have found some other way to acquire them, but he would undoubtedly have less readily-available access. After a mass shooting in Australia in 1996, semi-automatic weapons were banned. Currently, one must have a concrete reason other than self-defense to be licensed to own a firearm, unless the government is concerned about your mental health condition and your potential use of the firearm for ill intentions, in which case your license is revoked and you must immediately surrender your weapon.

In Japan, you can legally own only shotguns and air rifles. You have to attend a long class, take an exam, pass a shooting test with 95% accuracy or better, get mental health and drug screenings as well as criminal record checks and examinations of ties to hate groups, and your friends, family, and colleagues have to be assessed, too. No more than three gun shops are allowed in most of Japan’s 47 provinces. You can only buy cartridges if you show them that you have used all of your cartridges that you last purchased. Every three years, you have to retake the class and tests.

Sandy Hook should have been the wake-up call, but it wasn’t. Scumbags like Alex Jones called Sandy Hook a hoax, as though these parents were lying about their six-year-olds being shot and killed, as though these parents had manufactured their all-consuming grief for these children that were so cruelly taken from them. Since Dec. 14, 2012, there have been at least 2,409 mass shootings up to 2020 (in fact, at the time that I’m writing this, a major story in the news is how eight people were shot to death in what appears to be an anti-Asian act of hate in Atlanta, Georgia— that is happening right now). Instead, my freshman year, I watched as students at Marjory Stoneman Douglas High School were brutally murdered on Valentine’s Day. I watched as my teachers were forced to give us “safety briefings” during “Huron Valley Safety Week” the next month, where we were given very explicit instructions on what to do should an attacker enter the building.

They were coded as “lockdown instructions,” but the veil was thin. I don’t think there was a single student in that building that didn’t know what it really was. Some of my teachers chose to leave it vague, telling us what we should do and where we should go should someone “come in with intent to harm us.” I started quietly crying once I realized what this safety training was implying. My teacher pulled me to the side after class was over. I will never forget what he said to me. “I just wanted to say I’m sorry that this is your life now. I’m sorry that our officials have… have failed you so abysmally that you now have to worry about how to save your own life in school at the age of 15.”

I’m a senior in high school now, and I still make a silent mental note of escape routes from every classroom at the start of the year, should something happen. My teachers instructing us not to help a classmate if they’re “wounded”, which basically just meant shot, to just keep running and leave them behind, to not save them no matter what, will forever be branded at the forefront of my mind. I cannot forget it. My teachers didn’t sign up for this. We as students didn’t sign up for this. If Sandy Hook, with six adults and 20 innocent children murdered in cold blood wasn’t enough to make America take a step back and look at what it’s done to itself, we are a lost nation. We are beyond help. 20 children died, and their last moments were undoubtedly terrifying and overwhelmingly mortal, and we as a nation looked at that and said, “How sad… now we must move on.”

Nine years ago, Sandy Hook Elementary School was targeted in an act of cruel, unnecessary, disgusting violence, and students nowadays still live in fear of the same thing that invaded Newtown, Connecticut on Dec. 14, 2012. Now, Milford High School has put on a heartbreaking but necessary and relevant play about the aftermath of the tragedy, if only to prevent people from forgetting what happened that day. And that speaks volumes, doesn’t it? This is an issue so near the forefront of so many people’s minds that an entire production about it felt relevant to get people to still care nine years later. Any of those surviving six-year-olds are old enough to sit in that audience and understand that after all of the pain they went through, everything is the same. After all, they’re freshmen in high school— certainly old enough to understand that in the last nine years, America has taken nothing but gross inaction.

In fact, America has done nothing for them at all.