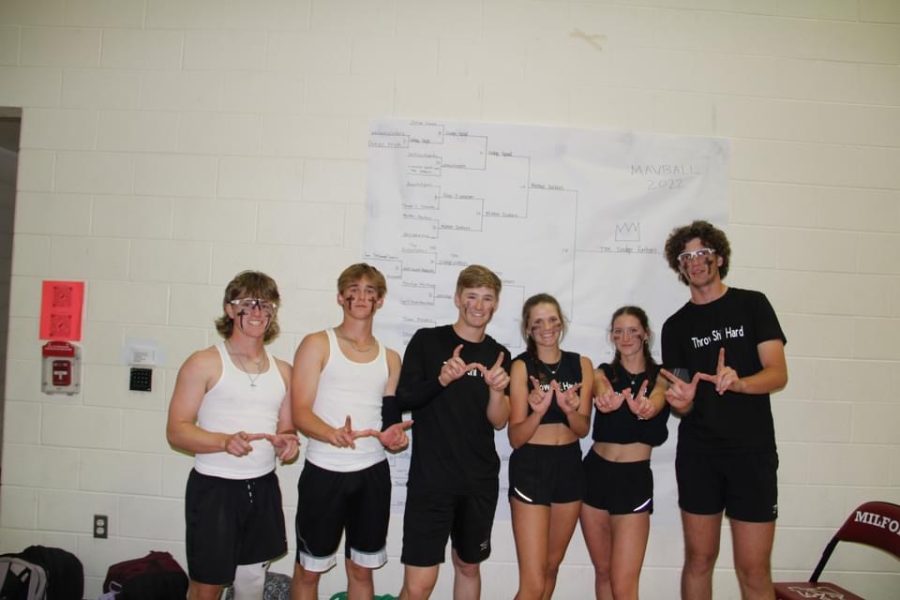 The Dodge Fathers after their big win on Wednesday.

Students from all grades shuffled into the field house on Wednesday, May 19th as a part of Charity Week 2022. Milford students take their dodgeball very seriously and this year was no exception.

The 17-seed bracket consisted of teams ranging from freshmen to seniors as the teams battled in the double-elimination tournament.

Usually the tournament would be held outside on the tennis courts, however, this year they were moved to the field house due to inclement weather. The field house was set up into three different courts marked by cones and divided in half for each team.

“Being a ref was pretty magical,” said Crow. “There wasn’t any yelling and only a little attitude and in that case I had my flags in hand ready to roll.” Just like with Milford sports, the competitive spirit runs high throughout the students.

Junior Shane Quinn gave some insight on what it took to be a part of one of the top teams in the tournament.

“The number of the teams that played this year made it very competitive, thankfully we had our coach Anthony Hutter who was an inspirational leader and had a plan laid out.” said Quinn. Quinn was on the team “The Power Rangers” that made it to top 3. He led his team with the most eliminations and was able to stay in play for the majority of their games.

The winning team, “The Dodge  Fathers,” was made up of Josh McCoy, Taylor Mitchell, Alex Jacokes, Camryn Keough, Logan McLaughlin and Jack Beyer. All members of the team are key players on Milford’s Baseball and Softball teams, which gave them the advantage when it came to exit speed of their throws. No team stood a chance against these athletes, multiple teams lost 6-0 while facing these beasts.

They have one final challenge as they faced the teacher team in front of the whole school at the wrap up charity week assembly to celebrate the money that was raised throughout the week.

“I’m excited, but I don’t wan to drill a teacher in the face and get a bad grade in the class,” said Jack Beyer.

At the assembly the team started off by playing Prestige Worldwide, who finished second in the tournament, because they needed a double elimination to win the whole bracket. The Dodge Fathers won 6-0 and were welcomed by loud cheers from all over the field house.

They next had to defeat a team made up of Milford’s finest teachers, David Gilbert, Jennifer VanGoethem, Michelle Cascadden, Julie Mitchell, Michelle Wall, Jennifer Hittle and Heather Lutz. To even the playing field the Dodge Fathers had to play the game using only their left hands.

In the end, even after some questionable plays and calls by the refs, The Dodge Fathers won, claiming their prize of nothing besides the right to gloat over their peers and teachers.