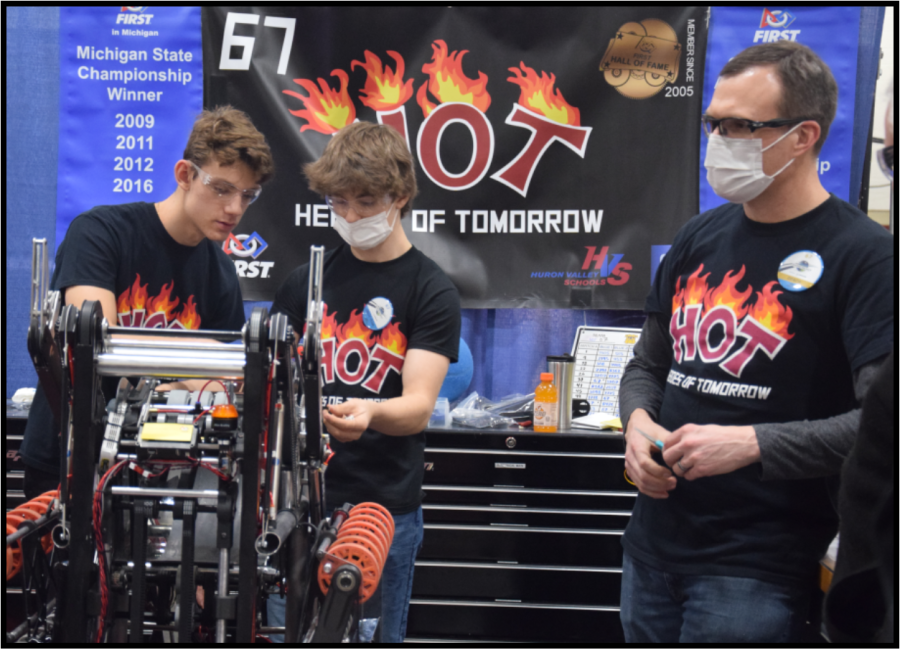 Ryan Hociota, Grant Stec and Jim Meyer work on the robot in between matches.

The HOT robotics team is internationally recognized, working with GM engineers to create some of the most unique engineering feats of any students in the world. After many impressive performances at local, state and World Championship competitions, the HOT team is in the FIRST Hall of fame.

Despite these many accomplishments, the HOT robotics program is still frequently unknown within the school community. People fail to understand both the everyday operations of the HOT team, as well as the sheer scope of skills that students learn when they are on the team.

When students join the robotics team, they decide between joining several groups: the design team, the machining team, the assembly team, the electrical team and the programming team. The design team works with mentors to develop a 3D model of the robot and all of the individual parts it uses. The machining team takes these part designs and turns them into real physical parts. The assembly team takes these parts and puts them together into an actual robot. The electrical team wires these parts together so they can be supplied with power and actually move. And programming then uses code so students can use an Xbox controller to move the robot how they want to. Each of these teams collaborate for a common goal and students gain a formative experience through this process and teamwork.

A prime example of this is 2021 graduate Alyssa Hagan. Hagan’s a mentor on the team (a mentor is equivalent to coaches in sports) but just last year was an integral team member. Before joining the team Hagan said,  “I had absolutely no idea what it meant to be an engineer,”  she said, noting she had not contemplated engineering as a career path. After four years on the team, she fell in love with the practice and is now enrolled at Kettering University and is currently interning at the General Motors Proving Grounds, helping the team in her free time. Hagan’s  story shows what the HOT team can do. She came in with almost no prior experience and left with a career path planned out and a great future in engineering ahead of her.

Senior Nick Blanchard is another student whose experiences with the HOT robotics team have shaped his future career path. Blanchard is the lead assembly student, who leads the charge in taking the parts the team has made and putting them together in a working robot. Blanchard  has also been accepted into the University of Michigan under the college of engineering. Blanchard said the HOT team has been an integral part of his future. “The team helped me to build the basic skills that I hope will help me at college, and just being enrolled in the team was a boost to my college application.”

While building engineering skills is the primary objective for most students, these skills can be applied to a multitude of futures. As Lori Gleason, the head mentor of HOT robotics and physics teacher here at Milford high school said, “You don’t have to know how to do robotics to join robotics. We would love to get some more marketers on the team along with people to work in T-Shirt designs and graphics.” Even if a student doesn’t directly take the skills learned as a part of the team, the teamwork and challenges help build character, problem-solving and communication skills.