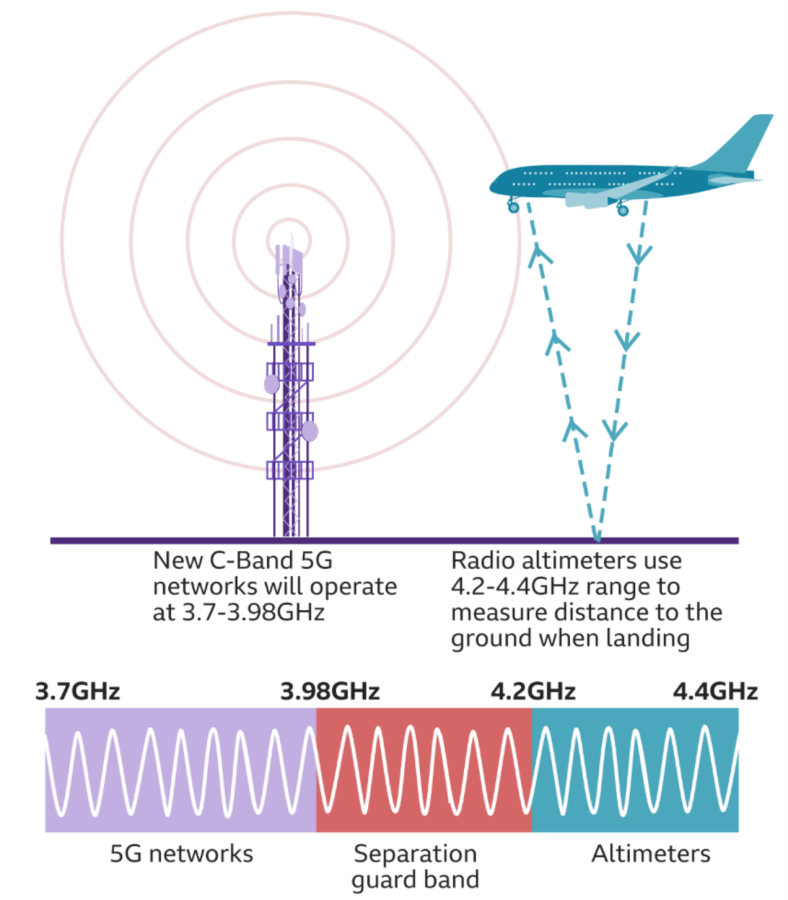 The separation guard band (also called buffer zone) is 0.22GHz in the United States. In Europe this buffer is 0.4GHz which means that there is a much lower chance for a signal to interfere with radio altimeters. Altimeters are very important to pilots because they are used when landing in poor visibility. Pilots rely on accurate readings from their altimeters to ensure a safe landing but interfering 5G signals could potentially distort or disrupt the readings, meaning pilots do not have an accurate reading on their altitude in the final landing stage of flight (Photo courtesy of the FCC/FAA).

Since 2014, there has been a push to develop 5th Generation telecommunications, more commonly referred to as 5G. This new generation of technology, with Verizon and AT&T at the designing forefront in the U.S., intends to create a more reliable, capable, and uniform experience for consumers. Data transmission rates will be 20Gbps faster than anything seen before. New products and devices will be created allowing advancements in augmented and virtual reality. More devices will be supported and still operate effectively. The issue is (and has been since the project’s conceptual stages) the possibility of interference with other frequency bands, mainly the one that all commercial aircraft, and some military, operate on. Frequency bands are a range of frequencies bought by or allocated to a certain company/organization to be used for a specific purpose such as AM and FM radio, mobile communications, television, etc. These straying signals have the capability to disrupt the reception of others and cause interference in their quality, sound, or appearance.

In 2021, the United States government auctioned off the bandwidth, 3.7-3.98 GHz, also known as the C band, for $80 billion to mobile phone companies. This bandwidth is close to the one airplanes use for crucial instruments like altimeters, which are used in aircraft for determining altitude, and are mainly utilized during landing in inclement weather/poor visibility. They also affect other operational systems in planes and helicopters. This posed more of an issue to older aircraft that have more outdated technology because the altimeters have a harder time filtering incoming signals. The U.S. Federal Aviation Administration (FAA) has been warning Verizon and AT&T to delay the rollout until it can be reviewed further or prevent using 5G technology within a two-mile radius of airports. The FAA has been looking into the possibility of 5G essentially confusing the altimeters and technology on planes. The issue is that the bandwidth that aircraft operate on is 4.2-4.4 GHz, and signals do not always stay in their designated bandwidth. Since the two bands are so close together, 5G signals could potentially stray out of where they belong, where they could interfere with aircraft during the critical final phase of flight. There were estimates as high as 90% of American flights that would be grounded if the rollout was not delayed. 5G has the potential to bring both domestic and international travel and commerce to a halt, in and out of the U.S..

The launch of the 5G technology has already been delayed a couple times, at the request of the FAA. This new generation was not the first one to cause controversy in the aviation world. Project LightSquared, in the early 2010’s, was causing interference with high precision GPS receivers. This was concerning the 4G LTE networks most mobile phones have been running on prior to the release of 5G in the U.S. LightSquared owned the frequency 1525-1559MHz, which was a mere 23 MHz under the bandwidth most GPS were operating on. There was national panic that all existing GPS would be deemed useless. In aviation, there was fear that these straying signals were going to interfere with not only commercial aircraft, but military as well. In a leaked FAA document from 2011, they outlined that if LightSquared did begin operation on that frequency all previously existing GPS infrastructure would need to be completely retrofitted. Project LightSquared went bankrupt, but later was reborn as Ligado Networks.The major issue with these signal bands is that the newer technology is essentially too powerful for older infrastructure.

Verizon has released a statement saying “The Federal Aviation Administration (FAA) and our nation’s airlines have not been able to fully resolve navigating 5G around airports, despite it being safe and fully operational in more than 40 other countries.” This is in reference to Europe, which has already had a successful 5G rollout. This is because the bandwidth they run their 5G networks on are on a slower, but wider band of 3.4-3.8 GHz. There have been no instances of signals in Europe interfering with altimeters. Officials believe this is because there is a larger buffer zone for signals compared to the United States. A spokesperson for the European Union Aviation Safety Agency (EASA), which oversees civil aviation in 31 counties, said “At this time, EASA is not aware of any in-service incidents caused by 5G interference” (KDRV News). Verizon and AT&T believe that if 5G networks can be supported across the continent of Europe, there should be no reason to delay the rollout in the United States again.

In France, they opted to be more cautious with 5G towers and signals near airports, instituting policy to ensure that there was a minimal chance for any sort of aviation catastrophe. Near 17 major France airports, antennas must be pointed away from the runway. Another key factor is that in Europe the antennas have considerably less power than the U.S. This was one of the reasons that there was much less tumult and controversy in Europe, albeit secondary to their operating bandwidth.

The day of the U.S. rollout, Wednesday, Jan. 19, and the following days, major airlines including British Airways, Lufthansa, and most notably Emirates Airlines cancelled flights to U.S. airports where the 5G signals were going to be operating at a stronger intensity than Europe. FlightRadar estimated that 240-320 flights were cancelled. The FAA released a list of aircraft that would not be impacted by possible stray C-Band signals, including many types of passenger and cargo planes. Initially this list excluded the older modeled, wide-bodied Boeing 777 and the double decker Airbus A380 which could greatly disrupt air travel. Neither of these planes’ exact models are still being produced with the A380 ending in 2021, and the 777 currently being developed into the 777x. These two planes are some of the largest commercial flight planes in operation, with the Boeing seating over 300 passengers, and the Airbus certified for up to 868 passengers.

Emirates, which flies only those two models as of early 2022, temporarily suspended or cancelled flights to half of their 12 U.S. passenger destinations. Three of those remaining six routes that were originally Boeing 777 flights were switched to their fleet of Airbus A380-800s. The action they took was preemptive, and while not necessary, Emirates president, Tim Clark, said , “We were not aware that the power of the antennas in the United States have been doubled compared to what’s going on elsewhere. We were not aware that the antenna themselves have been put into a vertical position rather than a slight slanting position, which then taken together compromise not only the radio altimeter systems but the flight control systems on the fly by wire aircraft” (CNN).  That was not all Clark had to say. His tone was scathing in reference to the actions of the U.S. government in selling the C-Band and not taking further measures to prevent an issue like this from arising. In reference to the U.S. handling of the rollout, he said “this is one of the most delinquent, utterly irresponsible issue subjects, call it what you like, I’ve seen in my aviation career.”

Currently, Verizon and AT&T have reached a temporary agreement with the FAA to reduce the 5G signal strength within two miles of airports and runways at over 50 airports. Although, the FCC has once again sided with the communications companies. The FCC Chairwoman released a statement that “Next-generation 5G technologies will be the backbone of our economic future.” The inner turmoil between the FCC and FAA likely means that there will be no long term agreement reached in the near future. Verizon and AT&T will only be held to these rules until early July. The coming six months until then will no doubt be plagued with controversy. It is also likely that similar issues will arise with the development of 6th generation technology (and so on). As time progresses, more and more bandwidths are being sold and utilized so that there will be no vacant frequencies with enough buffer zone to not create issues with other channels. Although 5G technology will be greatly beneficial to the consumer, and perhaps economy, does that outweigh the risks it poses to aviation in America?