The Milford Messenger • May 25, 2021 • https://www.themilfordmessenger.com/features/2021/05/25/twelve-seniors-recognized-for-academic-success/ 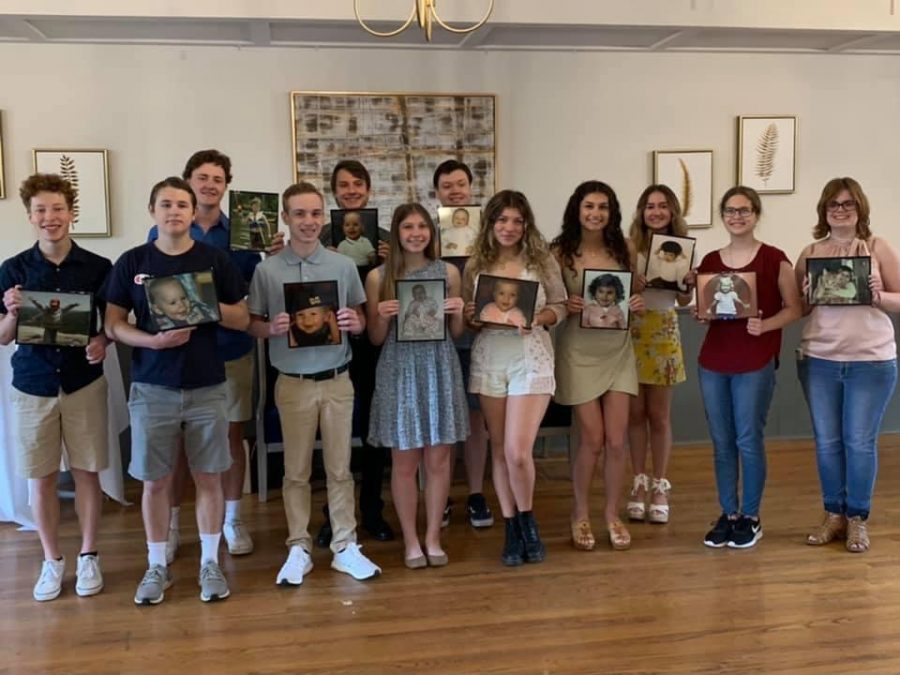 Capping off a successful, albeit unprecedented, four years of high school, the 2021 senior class is being recognized for their academic achievements. A remarkable 137 seniors have a GPA higher than 3.5, and out of these 137, 131 have identified a college they plan to attend in the fall. At least 47 seniors have received merit scholarships from their colleges, and an additional 23 were awarded local and memorial scholarships.

Their success is a combination of talent, hard work and guidance from parents, classmates and teachers.

Antrim will be attending the University of Michigan to study data science with a minor in music composition or performance. Antrim’s love for the arts is evident, as he was heavily involved with the Center Stage Varsity Choir and the Milford Theater Company, serving as Student Accompanist for all choirs. Antrim’s extracurricular activities also included competing on the MHS Varsity Ski team, participating as an NHS Public Relations Board, serving as Student Council President and representing Milford on the district’s TLT and DCIT boards. An integral part of Antrim’s academic success was the support he received throughout his high school journey. “I cannot give full credit to myself or any one person,” Antrim said. “[I am thankful for] my family for always supporting and loving me, my teachers for always providing challenges and opportunities, and my peers and friends for being by my side for every step of the way.”

Blanchard, who pursued his passion for science in his MHS extracurriculars, will be attending the University of Michigan and plans on pursuing an aerospace degree. Blanchard was involved in the HOT Robotics Team at Milford. “I also created the RC Club, which we were able to run last year, but because of COVID-19 we really haven’t been able to do anything this year,” Blanchard said. Like so many successful students, Blanchard’s academic pursuits have been shaped by his interests and passions. “If you can find something you really enjoy, pursue it and try to make it a bigger part of your life,” Blanchard said. “Because that will allow you to enjoy what you do and have fun.”

Carrannanto will also be attending the University of Michigan, and she plans on studying biochemistry. At Milford, Carrannanto was involved in a variety of extracurricular activities and sports. She was the Vice President of NHS and played softball, basketball, and volleyball. Carrannanto recognized the importance of balancing school and sports as an imperative part of her academic success. “I always put school before sports,” Carrannanto said. “My sister was a big role model for me, because she was really into school. She always helped me with classes and pushed me to be better.”

Dziedzic is headed to the University of Michigan to pursue an engineering path, considering both electrical and computer engineering. Dziedzic was involved in NHS and the MHS technology internship program at Milford and is also a passionate piano player. For Dziedzic, a love of learning was key to his achievements. “I would say hard work is obviously important,” Dziedzic said. “I guess paying attention to detail and always doing your best as well. You always want to know and actually understand stuff.”

Heitman will be attending Trine University in Indiana to major in computer science and business. He has also signed to play football at Trine, continuing his athletic involvement that included football, basketball, baseball, and the bass fishing team here at Milford. Heitman was also an assistant managing editor with the Milford Messenger Newspaper, often covering the paper’s outdoors stories. When discussing his academic success Heitman said, “[It is important to] understand that in the end it doesn’t really matter what you get on one specific test. It is all about building a strong work ethic in high school and trying not to worry about things.”

Hendry will be attending the University of Michigan to pursue a biology or biochemistry major as a part of a pre-med track. Hendry was also a part of the Milford soccer team and served as a member of NHS during his four years at Milford. When reflecting upon his academic success, Hendry noted the importance of, “Support from my parents and teachers and other friends who are competing for the same thing.” Hard work and dedication have guided Hendry throughout high school, noting that success is possible when you put the work in. “I didn’t know if I was going to be able to handle all the classes this year,” Hendry said. “But I worked through it and got support from people, and it worked out.”

Hess will be attending Brigham Young University in Utah next fall. She has played a leading role in many groups here at Milford including NHS, JOI club, and student council. She was also the vice president of student leading students and a board member for the community coalition.” Hess has also been a part of the color guard and was the sound tech for multiple Milford Theater Company productions. “I worked hard,” Hess said when discussing her academic journey at Milford. “I always did my best. I got all my work turned in, and I did everything I could to be successful.”

Klingensmith will be attending the University of Michigan in the fall. When discussing her plans for the future, Klingensmith said, “I plan on getting my first novel published while majoring in psychology.” At Milford, Klingensmith was involved with the Milford Band Program as a part of the Wind Ensemble, Marching Band, and Jazz Band. While Klingensmith had a strong aptitude for academics, she also believes in the importance of asking questions and further researching topics to truly garner a thorough understanding of your learning. “Oftentimes, I rephrase the things I learn in ways that make more sense to myself, such as the statement: ‘Napoleon went yeehaw!’,” Klingensmith said in reference to Napoleon’s conquer of Europe. “Does it make sense to most people? No, but it doesn’t matter what most people think, it matters how your own brain processes information.”

Schang will be attending the University of Michigan to pursue a degree in engineering. Outside of her academic pursuits, Schang was involved in Milford’s student council, robotics team, NHS and the golf team. For Schang, academic success quite simply involved, “Working hard and just putting in the time and effort.” Schang took on the impressive undertaking of six AP classes as a senior, and she recommends that younger students challenge themselves in the course load as well. “If you’re ever on the fence, just take the AP class,” Shang said.

Snyder will be attending the University of Michigan to study psychology. At Milford, Snyder noted, “I was in NHS, Center Stage, and then I was a part of the theater productions.” Most recently, Snyder starred in Milford Theater Company’s Winter Drama 26 Pebbles. Snyder believes that living a balanced life is important in high school. “Support from friends and focus on extracurriculars really helped me,” Snyder said. “Just try your best and everything will be ok.”

Spray will be attending New York University to major in Cinema Studies at NYU’s Tisch School of the Arts. At Milford, Spray was a part of the varsity pom team, a member of NHS, and was a managing editor during her junior year for the Milford Messenger. A strong work ethic and determination aided Spray in her academic success. “If you are dedicated and willing to go the extra mile, success will follow,” Spray stated, “That said, I am also thankful to have had excellent teachers during my time at Milford.”

Strominger will be attending Michigan State University to major in computer science. Strominger was an integral part of Milford’s bowling team, having played for the team for four years. With interests in math and science, Strominger credits his academic success to his natural talent. “I think it just naturally happens,” Strominger said.

Intrinsic to the educational pursuits of all students at Milford, several teachers stand out to the top seniors as influential to their academic success.

Chemistry and biology teacher Mr. Vosk is remembered by the seniors as a compassionate and motivating teacher, influencing many students to pursue careers in the science field.

“[Mr. Vosk] invigorated my love for exploration in STEM,” Antrim said. “I know my life’s purpose has been shaped by him.”

Hendry attests to Mr. Vosk’s influence. “I had [Mr. Vosk] for chemistry, biology, and AP Biology my junior year, and that’s why I am doing the [career] track I am,” Hendry said.

Klingensmith cites Mr. Turnbow and Mr. Vosk as inspirations throughout high school. “Even though life has thrown them through many loops, they keep on chugging, and that is something I aspire for myself,” said Klingensmith

English teacher Mr. Reschke brought his charisma both inside and outside of the classroom. “Mr. Reschke has helped me a lot in school and also with my future plans,” Schang said. ”He has helped me in writing my college essays.”

Carrannanto reflects fondly upon having Mr. Reschke as both a ninth-grade honors English teacher and a softball coach. “He was always energetic in class and at softball, and he was always there for me and my teammates,” Carrannanto said.

Theater director Mrs. Weeks and music director Mrs. Lambrecht have cultivated an impressive and impactful musical theater program. “Mrs. Lambrecht and Ms. Weeks have … helped me figure out who I am today, and I am eternally grateful to them for that,” Antrim said.

Snyder concurs stating, “[Mrs. Weeks] is my director and she’s always been there for me and taking chances on me.”

Physics teacher Ms. Gleason supported Blanchard’s aerospace interests. “She has been a mentor on the robotics team, and she’s the physics teacher,” Blanchard said. “I love physics so it’s always fun to have conversations with her about science and stuff.”

As the seniors looked ahead to their future academic pursuits, they shared the lessons they have learned throughout high school, and a consensus is clear. High school offers opportunities to grow and challenge yourself as a student, but just as importantly, as a person. “A lot of high school is about the experience, versus the academics,” Klingensmith said. “This is a place to discover who and what you want to be, regardless of how utterly terrifying that may sound. Be sure to enjoy it while you can, and throwing a fair amount of introspection into your life can really help.”