The Milford Messenger • May 25, 2021 • https://www.themilfordmessenger.com/features/2021/05/25/milford-student-creates-her-own-baking-company/ 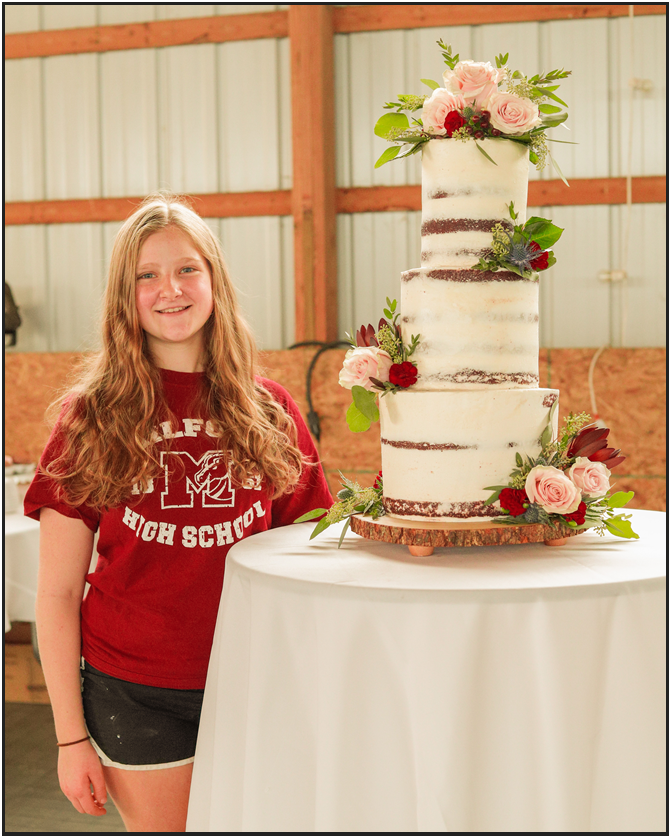 After six hours of virtual school, many students would be ready for a nap or would be looking for a way to wind down. Russell’s day is just getting started as she heads off to the kitchen for up to six hours to make cakes for her thriving business.

Kennedy Russell, a sophomore at Milford High School, is a successful baker and business owner. She has spent the past two years building her baking company, known as Kennedy’s Confections. She bakes cakes and other sweet treats that she sells through her social media pages and word-of-mouth.

Russell started her baking company back when she was in eighth grade in order to raise money for her class Washington D.C. trip. Her mom would post her cakes on Facebook and people would order cakes through the page. Russell would take donations for her cakes and she made enough money off them to cover her entire trip.

Russell bakes not only to make money, but also because of her love for making desserts. Russel said, “I love to test new recipes and see how different flavor combinations come together.”

She loves nailing challenging recipes, especially those with multiple components. Russell loves making unique fillings and frosting when a customer requests it. Although she enjoys decorating, Russell added, “I like stacking the cake and the process that goes with it more than the actual decorating part.”

She has been able to sell more baked goods and get her name out by selling cupcakes at Jeni’s Ugly Pies(jenisuglypies.com) in Highland. Russell goes into the kitchen at Jeni’s Ugly Pies once a week and bakes cupcakes to be sold throughout the week. She began to do this after she made a birthday cake for the owner’s son. Her cake caught the attention of the store owner and granted her the opportunity to have her product sold by the bakery. “Working at Jeni’s Ugly Pies weekly has caused an increase in business for me because people see my cupcakes and want more from me,” Russell said.

Because of the nature of Russell’s company, she has been able to maintain steady business throughout the pandemic. People can place orders through Instagram and Facebook and she can deliver them without an issue. Because she currently bakes in her home kitchen, she didn’t have to deal with any shutdowns.

“The hardest part [of running a business] is managing my time and figuring out how much I can take on at a time,” Russell said. Baking a cake is a long process and can take about four or five hours to make.

First, she has to communicate with the customers about what they are looking for. Sometimes they give her a photo to use for inspiration and sometimes she has to spend time researching ideas and thinking of creative ways to design her cake. Russell said, “I prefer when the customer gives me a photo because then I know for sure what they want.”

Russell then has to find and purchase the ingredients she needs. “It’s difficult to get the ingredients I need because I can’t drive yet and not every store has what I’m looking for,” Russell adds. She has to map out her shopping list beforehand and have a family member drive her to the store. Russell then has to bake the cake, make the frosting, and decorate the cake.

Russell has been learning how much she is capable of taking on each week while still maintaining a balanced schedule. Russell said, “I have to make sure I save enough time for my bowling team, hanging out with friends, and exercising.” Russell finds it difficult to turn down orders, however, she has realized that she doesn’t have time for everything.

Russell is currently enrolled in the virtual academy, and she begins baking the moment school is finished. She can spend up to six hours a day baking. Even with the amount of baking she already does, Russell recently put on a fundraiser for her bowling team in which she made brownies and blondies. She donated all the money she made to her team in order to help make their season happen.

While managing both school and athletics, Russell has been able to build a thriving baking company, proving that with determination and persistence, a teenager can run a successful business