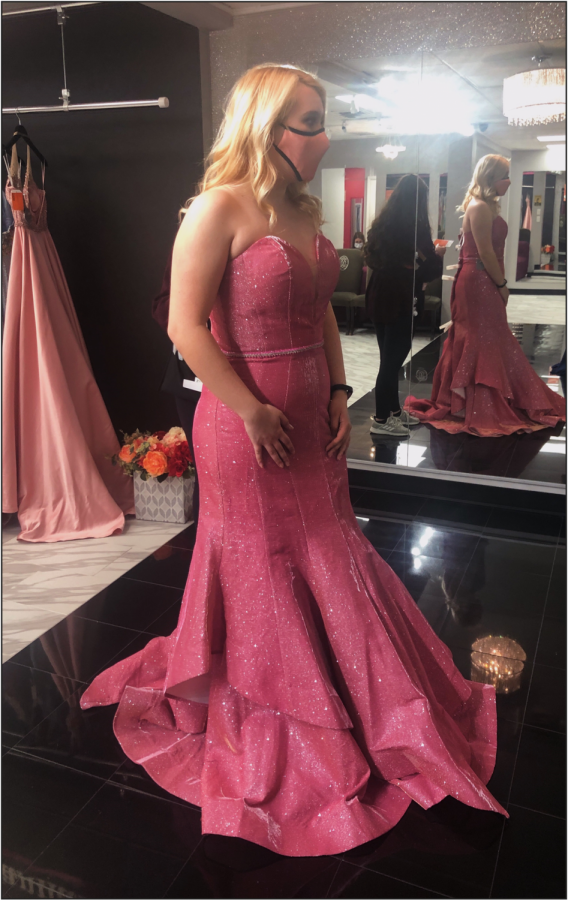 Milford High School Senior Jenna Natwick tries on a dress for prom, which is scheduled for Friday, May 28 at the Suburban Showplace in Novi.

Many students have been dreaming of going to prom since they were young— maybe they have older siblings that they watched prepare for and attend prom, or maybe they’ve always loved the idea of prom.

In 2020, the worst nightmare of many graduating seniors became frighteningly real when it was announced that one of the biggest events of the year, the senior prom, was cancelled due to the global COVID-19 pandemic. Hundreds of students were devastated— some had had their prom dates planned already, and many had purchased their dresses.

After missing this culminating night of fun and celebration to end their high school experience, they later had to graduate in cars, driving by the building they once called home and forced to miss out on the last (and largest) two events of their high school careers.

As the 2020 – 21 school year began, many Class of 2021 seniors felt that there was no end in sight for the halt to normal high school life, and wondered if they, too, would lose some— if not all— of their senior year to COVID-19. Homecoming was cancelled, spectator sports were limited, and most of the school year up until late January was fully online.

Although students knew it was important for everyone’s safety, the loss of so many important final experiences still stung. The one-year anniversary of the last day of school before COVID hit has just passed, and with it, an exciting new announcement: all of the sacrifices this year’s seniors have had to make and the challenges they have had to face were worth it because Milford High School will go forth with Prom 2021, scheduled for May 28.

Luckily, the Student Council prepared heavily before the announcement was made. A survey sent out on March 8 asked students whether or not they would be happy with an outdoor prom if COVID-19 statistics did not allow for an indoor prom, and it revealed that about 80% of students hold no preference for one or the other.

If plans at the usual venue, the Suburban Collection Showplace in Novi, fall through, the Student Council has come up with several contingency plans.

“We know that there will be something for sure, whether it be prom or something similar,” said MHS Senior Joe Antrim, the Student Council President. As for precautions?

“Masks will be mandatory and non-negotiable. Tell all your friends,” said Antrim, who helped to send out the survey and presented its results to the Huron Valley Board of Education. “[Student Council is] working very hard to make prom as safe as possible, so we can end the year with a celebration and some sense of normalcy. As long as everyone adheres to the guidelines we set in place, prom is going to be great.”

Though the prom theme has not yet been revealed, seniors are already eagerly preparing for the event by purchasing dresses and figuring out dates.

“I’ve been waiting for prom since my oldest sister went to prom seven years ago when she was a senior in high school,” exclaimed MHS Senior Cassidy Pakkala, who echoes many seniors’ sentiments.

However, although they are excited, a lot of seniors are nervous, since it’s their first major gathering in a pandemic-riddled world.

“It’s nice to be able to have a senior year milestone after we’ve lost so [many] of [them], but I do have concerns about how safe everything will be with COVID,” said MHS Senior Alexa Cheaney.

Though the student body as a whole has confidence in the fact that Milford staff and the Student Council will do their best to ensure that everyone is safe, the potential for problems lies within, well, the student body itself.

Though the vast majority of students have been doing their part to keep themselves and those around them safe, there have still been students that hosted and attended parties throughout the last year.

In years past, after prom, many students went to afterparties with their friends— a tradition that could potentially turn this year’s prom into a superspreader event.

“I really hope people make the smart choice and choose not to attend parties. I know I plan on having a small outdoor bonfire with a few of my friends after to stay COVID-safe,” Antrim said. “Unfortunately, once everyone leaves prom, the school and I can no longer dictate their actions, so I just hope people make the right [decisions].”

MHS Senior Olga Moustidi agreed: “With COVID, having a prom is honestly a stretch, as much as I want it. So, if we are going to have one, it should be kept very minimal. We should not make it bigger than it needs to be.”

Other traditions may still stand, though. Pre-prom plans usually involve taking pictures and getting ready with friends.

“I know in the past, it was very popular for prom [pictures] to be held at the amphitheater in Central Park, and I don’t think that will change. That’s been a long-standing Milford tradition,” Pakkala said.

As long as students remain careful about social distancing and make sure to wear their masks, prom will be just fine. Some students, like Moustidi and Cheaney, will go with a group of friends, and some students will attend with a date.

“I am currently single, so hit me up (Milford Messenger staff, please help me out)!” said Antrim, who describes himself as “single and ready to mingle.”

The Senior Class of 2021 has been dealt a poor hand this year. They lost nearly half of their in-person class time to COVID-19, they lost their last Homecoming; their theatre, band and choir performances, which were postponed; and their athletic seasons, which have had reduced competitions and spectators. However, they finally get the ending to high school that they’ve always envisioned.

Seniors get the fun with friends, the pictures, the dancing, the dress shopping, and the night to remember.

They get a graduation ceremony, a real and proper one, to cap everything off.  The news of prom going on no matter what is bittersweet, in a way, knowing all that the seniors have lost— but it truly is the best anyone could have hoped for, especially for those students who have been dreaming about it since they were little kids, like Pakkala.

After all, it’s their final hurrah.