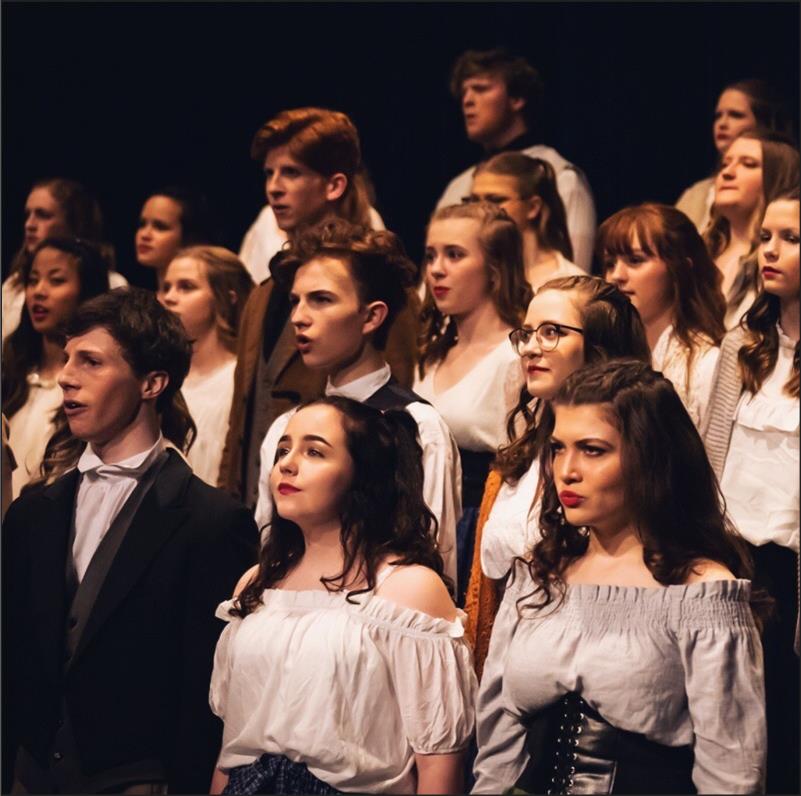 Since its establishment in the ’60s, the vocal music program has maintained its reputation as a staple in Milford culture. Originally founded by James Cutty, Milford’s choir remains as talented, hardworking, and dedicated as it was generations ago.

The choir produces multiple shows every year leading up to the POPs concert, an extensive production featuring Choraleers and Center Stage members. The success of the vocal music program stems from the driven members, who not only devote their valuable time to developing their vocal talent, but enjoy it because of their passion for singing and performing.

“Choir is definitely a lot of commitment, especially when it comes near POPs season because you are required to come to all rehearsals and give it your best every time,” explained Choraleers member and Junior Clare Miller. 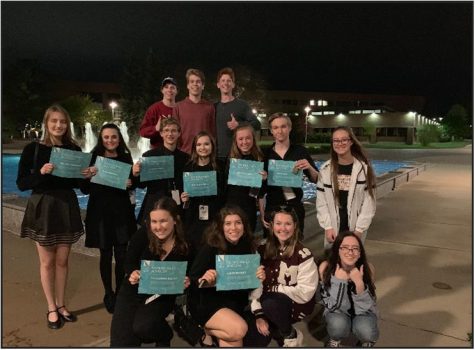 In addition to group performances in and out of school, members may also compete individually for prestigious awards and scholarships.

“Choir is a huge commitment if you choose for it to be,” said Center Stage member and Junior Aspen Snyder. “Since I choose to participate in every competition available to me as well as our theatre program, I am booked all year with rehearsals, lessons, and performances.”

Sydney White, another Center Stage member and Junior, also noted the many opportunities the program provides.

“I’ve auditioned and performed with Honors Choir, Solo and Ensemble, and Thespian Festival; I have also started auditioning for colleges.”

In addition to traveling to exciting and educational destinations, members can demonstrate their talent and work toward building a name for themselves in the world of vocal music.

“My proudest moment this year has probably been making it to State Honors Choir and having the privilege to sing at the Michigan Music Conference,” Snyder explained.

With a program that requires as much determination as Milford Vocal Music, members often face insecurities that can be difficult to overcome. “One of the biggest challenges is trying to not compare your singing and dancing ability to everyone else,” described Miller. “The choir is full of absolutely stunning voices, which makes auditioning for solos for concerts hard to manage at times.”

Snyder added, “The constant comparison to my friends is my biggest challenge in the choir program. We are often competing for the same things and it can be easy to compare yourself to others.”

“The choir travels to New York, where we get to see Broadway shows,” White explained. “There’s also a camp in Macomb that varsity choir members attend in the summer, where we get amazing training from 9-5 every day for a week.”

In addition to traveling to exciting and educational destinations, members are also given the chance to better themselves without traveling. “I get hours of one-on-one personal training for free, which has helped me grow so much as a performer and a person,” said Snyder.

Milford’s hardworking choir is fueled by the assistance, coaching, and reassurance by staff and directors.

“Without Mrs. Weeks, Mrs. Martin, and Mrs. Granroth, our choir could never be as good as it is now,” said Miller. “We have a team of people who constantly work for us to make us the very best we can be. Snyder added, “Whether it’s preparing for a college audition or for a choir concert, our directors know what they are doing and go above and beyond.”

Since 2006, Milford Choir has been led by Maryann Lambrecht, who has demonstrated her devotion to her students and to vocal music since the beginning. “[Mrs. Lambrecht] is the whole reason why Milford Choir is still happening,” Miller explained. “She comes home and keeps working, whether it’s finding songs, having private lessons, or planning concerts. She sometimes stays up until 3 AM listening to songs for us to sing.”

Milford Choir  prepares each member for a possible career in the arts. “Milford Choir has helped me to see that I want to go to college for musical theatre,” White exclaimed. “I’ve already been accepted early into a school in New York City, which I wouldn’t have been able to do without my training in choir.” Snyder also plans to go to college for acting in film and TV productions.

As students are trained throughout their high school years, they enter the adult world as confident, experienced, and devoted individuals. “Choir has made a huge impact on my life,” began Miller.

“It’s taught me conversation skills by having to work and be comfortable with new people; I also conquered my fear of performing for a crowd, which was one of the best feelings ever.”

The life-changing impact that the Milford Choir Program has on its members is one-of-a-kind, and memories from countless experiences and opportunities persist long after the final curtain closes.